August 29, 2021
A Tale of Female Martial Arts Supremacy by Kicked 72 Pt. 3 of 5 The Boss’s Filthy Ritual The big Boss was relaxing in his luxurious suite, totally oblivious to the fact that the much feared destroyer of his once mighty clan was getting so dangerously close to him. The apartment was hidden inside a fortified bunker in the basement of a giant mansion. The 50 years old Mafioso was getting ready for his bi-weekly sexual room service: in the meantime, the young female martial arts avenger he was hiding from was already inside the Villa, literally smashing his few remaining sicarios to bits with her lethal pantyhosed feet. Totally unaware of the proceedings, the crime lord felt safe and untouchable in his refuge: his location was absolutely secret (or so he believed…), armed guards were all around him and, moreover, he was hiding underground in a bombproof - other than soundproof - bunker. The only contact he had with the outside world were the girls that he was having over regularly, in ord
8 comments
Read more 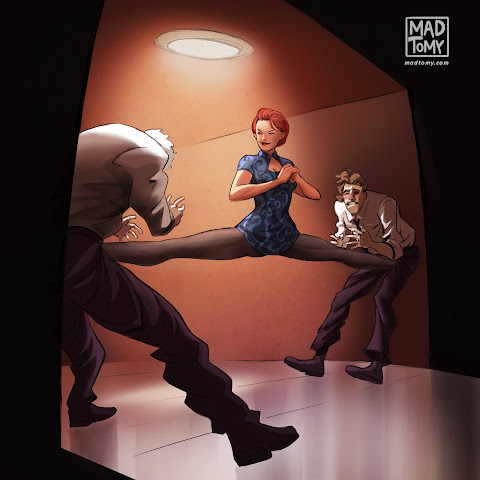 A story By Kicked72.  Featuring exclusive artwork by Mad Tomy (www.madtomy.com) Pt. 2 of 5: see previous post for Part 1 Breaking In The young female martial arts avenger walked through the imposing wooden door of the villa with the confidence, the fluidity, and the authority of a panther. Once she got in, she found herself all alone in the middle of the huge entrance hall. In the previous days, she had studied the anti-intrusion system and the planimetry of the entire mansion with extreme accuracy, so she knew exactly where to go. She also knew that after having disposed of the first two henchmen, she wouldn’t have to face any other opponents until she reached the corridor leading to the underground bunker where the boss was hiding. After that, there was a staircase going down several steps, leading right into the bunker’s blast doors. The corridor leading to the staircase was guarded by two Mafiosi: this was the ultimate checkpoint, the last hurdle between her and the main objective
3 comments
Read more
More posts